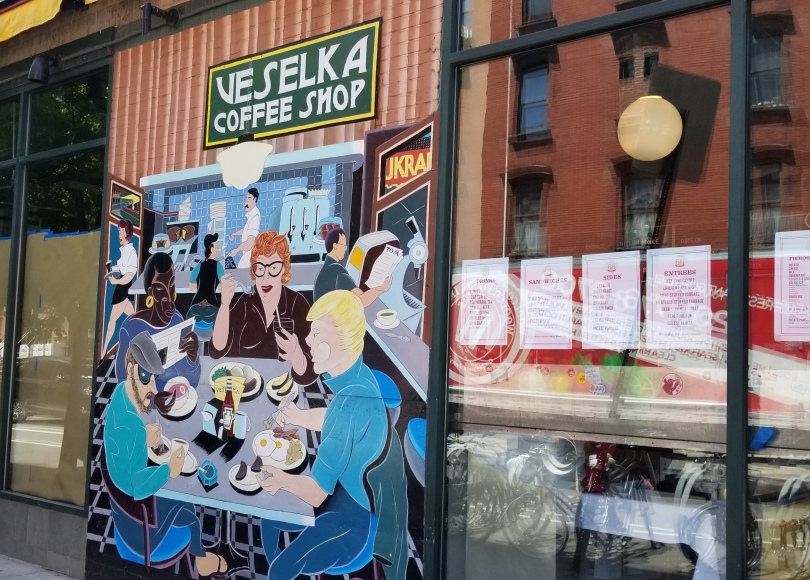 One advantage of being a New Yorker during the COVID-19 pandemic was the ability to travel around Manhattan with virtually no traffic along with the ability to park just about anywhere for free.

My wife and I seized the moment and decided to visit Videogamesnewyork, a vintage gaming store in the East Village to repair a Super Nintendo game that I had dug up.

While mapping it out we had discovered that a Ukrainian restaurant my Pastor had been raving about for years was close by and decided that this was a perfect time to try it. The restaurant, Veselka, was walking distance from the store and offered some classic Eastern European delicacies such as pirogues and potato pancakes.

The drive into the city was a breeze with little to no traffic. We parked right in front of the store, got the game repaired and headed over to the restaurant for some takeout.

Veselka instructed all guests to wait outside and had a picture of their limited menu posted in the window.

We knew there were a few items on the menu that were must haves including the latkes and the pierogis. We decided to get the cheese and short rib pierogis with a small order of potato pancakes on the side.

We also wanted to try one of their entrees and debated between beef stroganoff and meat stuffed cabbage in tomato sauce. We ultimately decided on the latter of the two and added a beet salad and matzo ball soup. The order ended up being enough food for lunch and dinner.

The food took around 15 minutes to be prepared and after getting our order, we walked to a park a few blocks down to dig into this wondrous delicacy. This was not a style of food that either of us had ever had so we were pretty excited about it.

The park was pretty empty like the rest of NYC around that period of time. We grabbed a seat and focused on the appetizers.

The pierogis came with sour cream and apple sauce for dipping along with sautéed onions on the side. The short rib ones were delicious and had a flavor that reminded me of my mom’s homemade pot roast. The apple sauce was not sweet and I preferred the sour cream for dipping.

The cheese pierogis were also good but a bit more forgettable. Overall, we were satisfied with that part of the meal. We then moved on to the potato pancakes which blended well with the sour cream and apple sauce. The pancakes were a bit greasy and probably suffered from overcooking in the takeout box but still were delicious.

The outside was crunchy and the overall flavor was similar to a well done french fry.

We saved a pancake for later and started to eat our meat stuffed cabbage in tomato sauce.

To be honest, this was the dish that blew me away. The tomato sauce tasted like a well seasoned tomato soup and was the perfect compliment to the rich and hearty meat that was stuffed into the delightfully cooked cabbage. There were some crunchy ends with some nice burnt flavor and the hearty dish made for the perfect main course.

The beet salad was mixed with what tasted like a good amount of horseradish which killed the earthiness that sometimes makes the vegetable unpalatable for me. I really enjoyed it, but if you like the taste of beets it just might be a bit too much for you.

Once we finished, we packed our meal back into the bag and headed for coffee. We finished the rest of our food later that night and enjoyed the savory matzo ball soup which paired perfectly with a sweet cold Coca-cola.

Overall, Veselka is a great place to experience Ukrainian  comfort food in the East Village. We will definitely return there once they offer indoor/outdoor dining to get the full experience.

I also hear their breakfast is pretty good. Maybe we’ll try that next time!