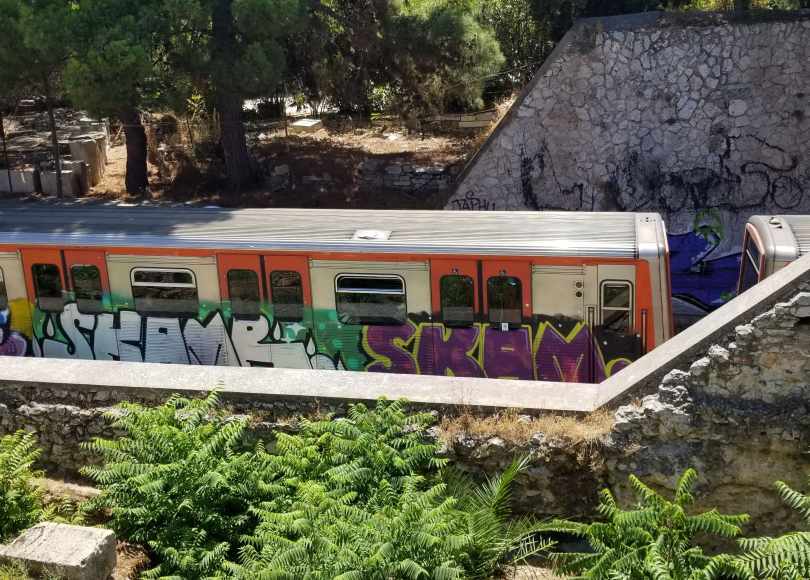 If you New York transplants are unhappy with the gentrified, faux-Disneyworld streets you inherited, and hanker more for the grimy, Big Apple of the 1970s and 80s rapped about by groups like Mobb Deep, than Athens might be the perfect place for you.

There is so much graffiti….

Athens immediately brought be back to my childhood where my parents would tell me things like, “graffiti is disgusting unless they try to paint something pretty.” And I’m not exaggerating. The ruins, monuments, restaurants, trains and buildings are covered in tags and slogans penned by some of Athens’ finest graffiti artists. I even think we caught one staking out at the national library to tag a 1000-year old tree. There are no bounds for these anarchists fed-up with the slow economy and what they perceive as a corrupt government.

There’s so many Greek and Roman Ruins to see!

But a trip down memory lane for native New Yorkers isn’t all that Athens has to offer. It’s also rich with ruin sites including old Roman emperor Hadrian’s Library, the Athens Agora, Roman Agora, Temple of Zeus, the Olympic stadium and the infamous Acropolis of Athens.

For our first full day in the city, we decided to take one of those hop-on, hop-off buses and visited a few notable stops on the trip. First, we got off at the Panathenaic Olympic stadium which looked like a high-school stadium build in ancient times as it was much smaller than anything used today.

We took a few pictures and then got back on the bus to head towards the National Archeological Museum of Athens which was filled with countless statues of Greek gods showing off their manhood, graves and even memorials for pets. A lot of the work found here echoed what we saw in Corinth the day before.

In our bus ride we passed some of Athens most prized buildings including the National Library, and the University which we would take a closer look at later on in the trip. Their buildings were designed like ancient Greek temples and were breath-taking in their own right.

We also caught a glimpse of the guards at the Hellenic Parliament where on Sundays a special ceremony is held using the official customs. We planned to head back to catch it. One of the bus ride’s last stops was Monastiraki Square where you could find a massive flea market, the city’s central fish and meat market and some other ruins worth checking out. This would become one of our go-to areas for the remainder of our stay in Athens due to Coffee Lab, a chain coffee shop where we could get what the Greek call a frappe, a mix of Greek coffee, ice, milk and sugar that makes for a delicious delight in the sweltering heat.

Lukumades are the best donut holes ever!!!

Other treats consumed on that day included a delicious orange soda that I was able to buy for one euro at the bus stop in Syntagma Square, and lukumades, Greek donut holes doused in honey and sweet cream ice cream that we made an evening trek for. The lukumades come out hot and buttery, and the cold ice cream compliments it much like it does with any a la mode. However, sweet cream flavor has a distinct taste that meshes with the honey.

The best restaurant in Athens!

The treats were great, but the undeniable stand-out of the day was a restaurant recommended to us by our Corinth tour-guide Panos called Tzitzikas kai Mermigas by Syntagma Square. I had a slow-braised goat dish there that tasted like a mix of lamb and steak and had the texture of butter. It was to die for. I was skeptical of it at first, but the waiter’s recommendation pushed me to take the risk of trying the meat which was something that I had never eaten before. My wife ordered another waiter-recommendation with the Santorinio, which is a pork dish made with wine sauce and capers. Her dish was also out-of-this-world. This restaurant made such an impact on us that we had to return here later in the trip.

It was so freaking hot!!

The first full day in Athens was super-hot, being that we were there in August, so we bought plenty of water to stay hydrated. Luckily, it was pretty cheap. It’s a very walkable city so that’s definitely a plus. And even though that makes it more affordable, it makes the traveling exhausting, especially in the heat. It’s also very hilly so make sure you bring a good pair of sneakers. Aside from the countless buckets of sweat that dripped off my body, I also had a nasty abscess from the Haribo gummy candies we bought back in Denmark that was getting more irritated as the days progressed. I would soon have to deal with it head-on to properly prepare for our trip back to Santorini.