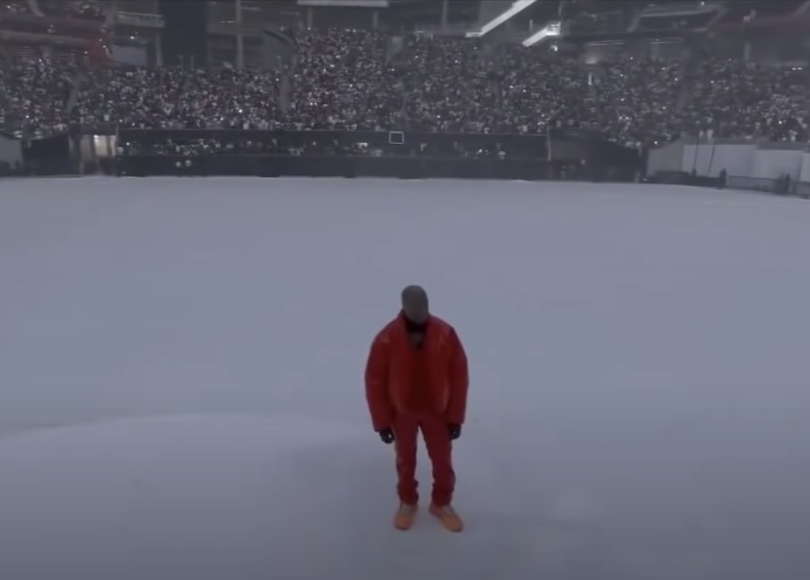 Kanye West has been trying to marry his faith, albeit a much weaker one back in 2013, with his music, since dropping the polarizing Yeezus almost 10 years ago.

It looks like after many attempts, he’s succeeded in this goal with his latest offering, Donda which is easily his greatest project since his 2010 magnum opus My Beautiful Dark Twisted Fantasy.

On Yeezus he rapped “I am a god, even thought I’m a man of God,” and even included an actor portraying Jesus in his live stage show on the accompanying tour. However, the album itself divided fans and critics due to Kanye’s adoption of a new, more industrialized sound, and his decision to leave the soul beats that made him famous off the project for the most part.

The album also bordered on blasphemy with lines like ‘Yeezus just rose again,’ while referring to his sexual arousal.

His obsession with having a seat at the table of world’s great designers took center stage, and what we got on Yeezus was a Kanye with an even bigger chip on his shoulder than he had on The College Dropout, after dropping stellar music for nearly a decade. The god theme just did not mesh well with the project at all, and it might have been received better had he went with another title that outlined his distaste for the elitists in the fashion world that he claimed were shutting him out.

Three years later he tried meshing his faith with his music again and released what he described as a “gospel album with a whole lot of cursing on it” with The Life of Pablo. While the sonics certainly moved more towards the direction of gospel, the lyrics mostly had nothing to do with God with the exception of a few songs.

Instead of talking boldly a faith established back on “Jesus Walks”, West opted instead to taunt his newfound friend Taylor Swift in ‘Famous’ and rap about model’s bleached anuses in Tribeca on tracks like ‘Father Stretch My Hands Pt 1.’ The effort was confusing to say the least.

Kanye then gets radically saved by Jesus in 2018 and we get Jesus Is King. (I know I’m leaving out Ye, but that album was pretty much mailed in with the exception of ‘Ghost Town.’)

The lyrics saw a dramatic shift to more traditional Christian content, and the sounds were certainly more palatable for an audience of believers. However, Yeezy fans felt alienated by the project because it sounded nothing like a Kanye West album, and more like something we’d get from Lecrae.

Well, Donda is the culmination of the past eleven years of attempts at making an album that rightly reflects his relationship with God, mixed with the grandiose of his critically acclaimed pre-Yeezus discography.

Kanye stays true to his newfound fervor for Christ throughout the entire project, and even pushes his guests which include Fivio Foreign, Jay-Z, Travis Scott, Jay Electronica and The Lox to focus more on the divine.

Even the Weeknd gets in his gospel bag belting out “Father hold me close, don’t let me down” on the beloved “Hurricane.”

Kanye’s first five albums used guest appearances to further enhance his own performance while highlighting his skills as a producer, and while TLOP tried reviving that concept, there was no clear message.

However, Kanye is back doing what he does best on Donda adopting the latest Brooklyn drill movement and making it his own on “Off the Grid.” This is probably Kanye’s first undeniable radio banger since 2012’s “Mercy.” In fact, a lot of this album mirrors some of the best moments from his Cruel Summer compilation with Kanye delivering one fire verse per song, and it feels like he makes it count each time.

On “Jesus Lord,” Kanye touches on all kinds of topics including his late mother, troubled teens and struggles of the disenfranchised in ways we haven’t heard since Late Registration. He also goes toe to toe with expert wordsmith Jay Electronica who drops his best verse in years.

The album has been criticized for its bloated tracklist, but a lot of the early reviews dropped just 1-2 days after the initial release giving little time for listeners to really digest what Kanye has given us.

West also tried something different on the project by providing fans with two versions of multiple tracks including another version of “Jail” with DaBaby, and “Jesus Lord” with The Lox. These alternate versions are usually left in Pro Tools purgatory with most artists, however, Mr. West provided fans with a treat in letting them decide with version they’d want to put on their playlist. The album is quite customizable.

On Donda, we get the return of some Kanyes we haven’t seen in awhile. On tracks like “New Again”, and “Believe What I Say,” you can hear hints of Graduation era Kanye offering up soulful messages and crooning about his failed marriage. On “Jail Pt 1,” we finally see the return of The Throne with an inspiring guest verse from Jay-Hova himself. We also get a little bit of Yeezus flavor on “God Breathed on This” which ironically reminds me of “I Am a God.”

Some of my personal favorites include “Praise God” w/ Travis Scott and Baby Keem, “Hurricane” with the Weeknd and Lil Baby, and “Off the Grid” w/ Playboi Carti and Fivio Foreign. West even brings out the best in Lil Yachty on “Ok Ok Pt 1” which features what I think are a few shots at Drake.

What I like most about Kanye’s lyrics is that they don’t come across preachy, holier than thou, or blasphemous. He perfectly toes the line on the project by being honest about his life and weaknesses while still touting God as his savior.

I wasn’t expecting Kanye to give me a New Testament lesson anytime soon, but I did want more of a Kanye West sound and delivery on Jesus Is King and we had to wait until Donda to get it.

The track “Remote Control” is a perfect example. Kanye croons about his past with women in a way he would have pre-Jesus Is King, but yet there is an acknowledgement of God taking him away from that. Just 2 years ago, he would have swore off lyrics this honest.

Please don’t ask again, who’s up in the van?
They my only fans
I was in my hovercraft, had another laugh
How you roll with them? When you know I’m him

As a longtime Kanye West fan, I was pleasantly surprised by Donda after over 10 years of duds. Between all of his projects released between 2010 and 2019, there’s only a handful of songs that I like. On this project, a new song grows on me each day.

I believe the longer Donda matures, the more it will be appreciated for its genius.

Does it touch Kanye’s early discography which is arguably one of the greatest in music? Well that remains to be seen, but the hard work Mr. West put in here certainly paid off.

Donda is easily his best and most cohesive project since “MBDTF.”